All articles of Frank
Interview

The science in the cards of ImmunoWars

Imagine: you’d like to bring the current state of immunology to the general public in an understandable and fun way. That’s quite a challenge, so how can you best go about it? Well, with a card game of course!

At least, that’s Rafael Jezior and Dennis de Beeld’s plan. They’re two students of Life Science & Technology here in Leiden and for the past two years, they’ve been developing ImmunoWars. It’s a card game in which players use the newest vaccines and antibiotics to protect themselves from viral and bacterial attacks from their opponents. On crowdfunding-website Kickstarter there has already been a cumulative pledge of €14,000 to the game, which Rafael and Dennis are cleverly using to produce an ambitious piece of science communication in the shape of a scientifically accurate and fun game.

Before we get into the deeper ideas behind ImmunoWars, we first have to look at the game itself. Below you’ll see a series of cards you could encounter in the game: viruses like Ebola, Dengue and Covid-19, but also the stemcell, which can help your immune system, or an item like the gas mask. The goal of ImmunoWars it to eliminate the other players at the table with viral and bacterial infections, all the while trying to be the last one standing by using vaccines, medication, armour and, of course, your immune system. 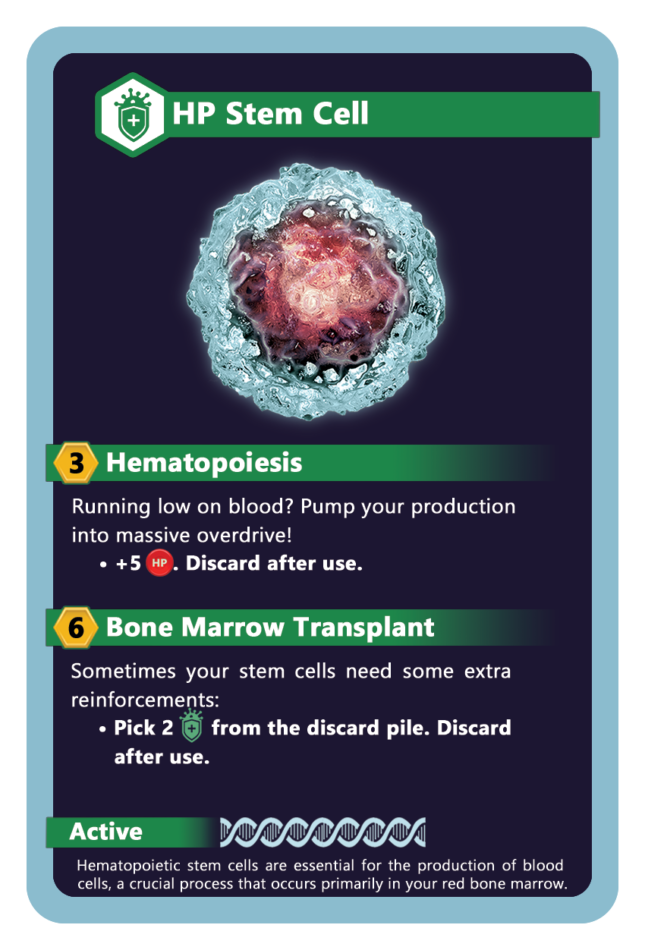 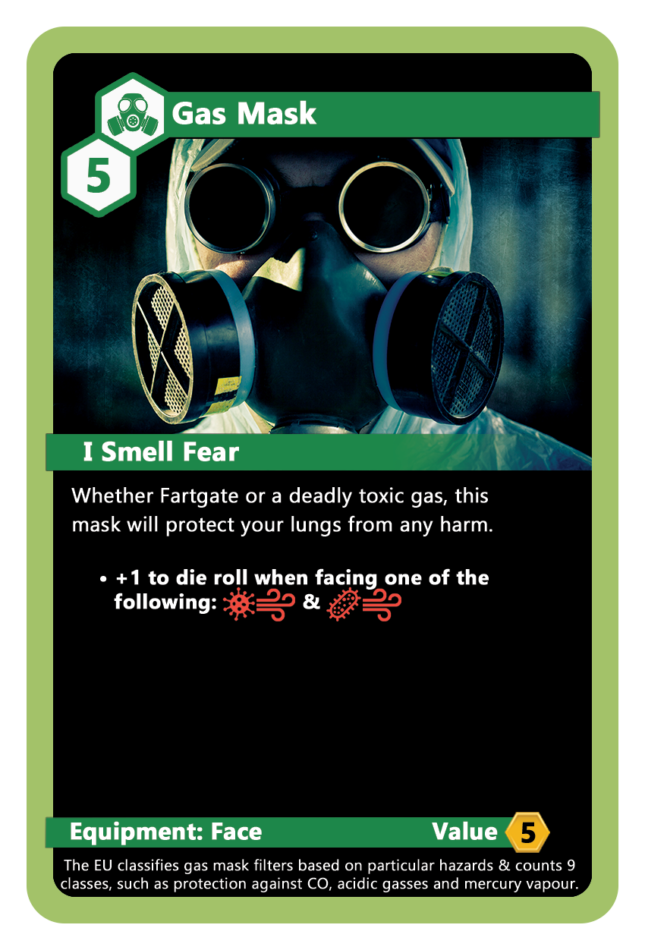 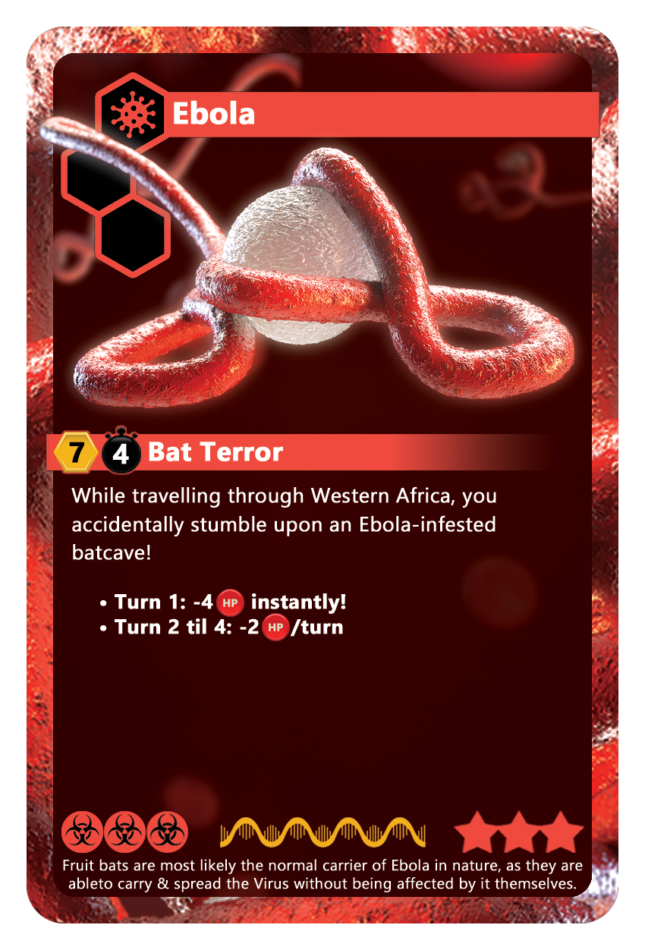 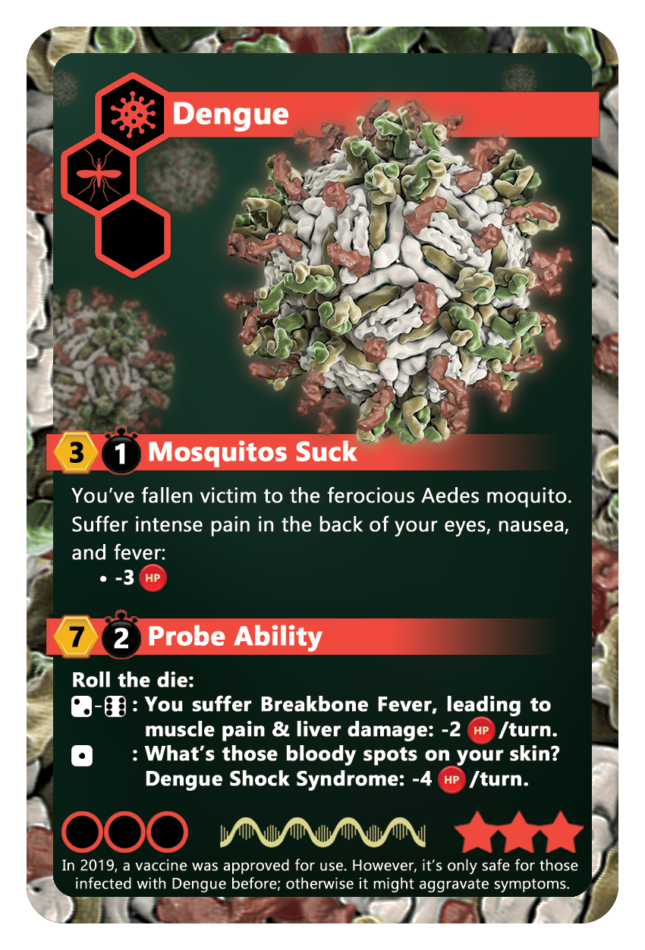 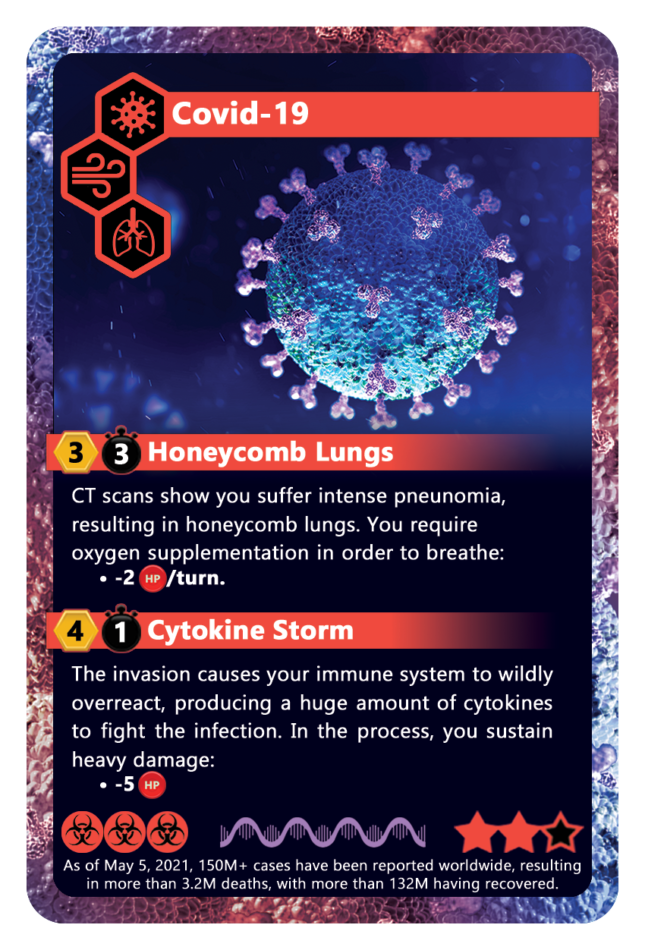 You might also have noticed that there’s a short piece of informative text at the bottom of each card. It’s one of many ways with which Rafael and Dennis convey current scientific insights, with the card game as a sort of Trojan horse: ‘gamification’ of science. But to get to that point, there’s quite a bit of work to do first…

In the enterprise behind ImmunoWars you two are doing everything. What does that entail, exactly?

RJ: “In general, we occupy ourselves with two processes: on the one hand there’s ‘product development’, meaning how the game works and is designed, and on the other hand there’s ‘business development’, which is about the kind of company we want to be. That means things like marketing and web development, which we do together, finance, which Dennis’ brother is helping us with tremendously, and legal, which we’re aided with too.”

DB: “As you can hear, we’d ideally like to have a team of about 8 to 10 people, each doing their own thing. Because if you’re doing a single task, you can actually get good at it. The expansion of the team is something we’re looking forward to a lot.”

RJ: “And for the ‘gamification’ of ImmunoWars as an educational platform, it’s really important that we appoint a ‘Chief of Science’, someone who has connections with the university so that we can incorporate a lot of research into the game.”

That’s your central vision, that ‘gamification’ of science, isn’t it?

DB: “Definitely, we want to make sure that new developments in the field are communicated to the layman and the entire world in a trustworthy and playful way. Like a newspaper, but with cards.”

RJ: “Look, science is cool and everyone inside science knows that. But that message doesn’t always find the general public. That’s what we’re for, to show the public how cool science is, intuitively and visually.”

DB: “For example: last week we were at Biopartner 5, where a lot of new technologies are being developed, like ‘ceramic vaccine-pads’. These are like bandaids with thousands of micro-needles attached that do make contact with your skin, but not with your nerves, which lie deeper down. These could be used for vaccinations, instead of needles. We’d like to make these pads into cards, to communicate: hey, this is out there!”

That sounds great, but it does raise a somewhat critical question: you could continuously update an online game, but not a card game. How are you planning to keep up with scientific innovation with ImmunoWars?

RJ: “We have two ways to do that. For the first we want to bring out new games, like ImmunoWars: Into the Wild, which would be about parasites and fungi. That way we get new, thematic additions to the game over the years. Besides that there are of course scientific developments that influence the base game. If those developments are numerous enough, we plan to release the base game again, with the necessary updates. Then we’d get a 2023-version and a 2024-version and so on. That also enables people to compare versions, to see what kinds of innovations have taken place over the years. That way, the ‘problem’ of having to update a physical card game actually becomes a strength!”

That requires a lot of research, I can imagine. How do you two handle that, in order to make those 105 cards?

RJ: “Reading papers and publications, and the websites of the RIVM and CDC, in order to determine what kind of function each idea for a card might end up with.”

DB: “With that approach we have around 500 ideas for cards written out, but it can be hard to incorporate those ideas into the game. To resolve this, we first have to delve into something like a disease to really figure out what kind of vaccines there are, other possible medications, how infectious it is, how many people have died from it, how well known it is right now, the symptoms, you name it. We note all information we find, with their sources.”

RJ: “In the back of the manual there are two QR-codes. With the one people can ask questions, suggest research or report inaccuracies and with the other one will find our online bibliography. That way, people can find out more about the science behind the game.”

Then finally I’d like to know, out of all the ideas for cards you’ve come up with, what’s your ‘white whale’? What idea for a card would you still like to implement into the game?

RJ: “As a tribute to one of our favorite teachers, Mathieu Noteborn, I would love to design an ‘apoptosis’-card [apoptosis is programmed cell death, an important biochemical process, ed.]. He played an important role in the understanding of the apoptin-protein. He also gave great lectures, he was a really inspiring man. So if that card could be added to the game, I’d be really happy.”

This final story shows how creative and engaged Rafael and Dennis are when designing their game. I’ve been able to discover that myself when we played a game of ImmunoWars after the interview. The cards are filled to the brim with ideas that somehow also synergise and cause surprising moments in gameplay. ImmunoWars is now available for pre-order through the website and will be officially published within a few months. I highly recommend it!

Update 30/05/2022: At the 25th of March Rafel and Dennis organized a party to celebrate the official launch of the game. I was there and received the first edition of the game, including the first expansion pack full of sexually transmitted diseases. Great. In the meantime, around a thousand copies of ImmunoWars have been sold, and the first official tournament is history.

A Game Changers Event will be held for the Leiden City of Science on the 15th of November, a day that will revolve around gamification of education. ImmunoWars will host this night, so try to be there!